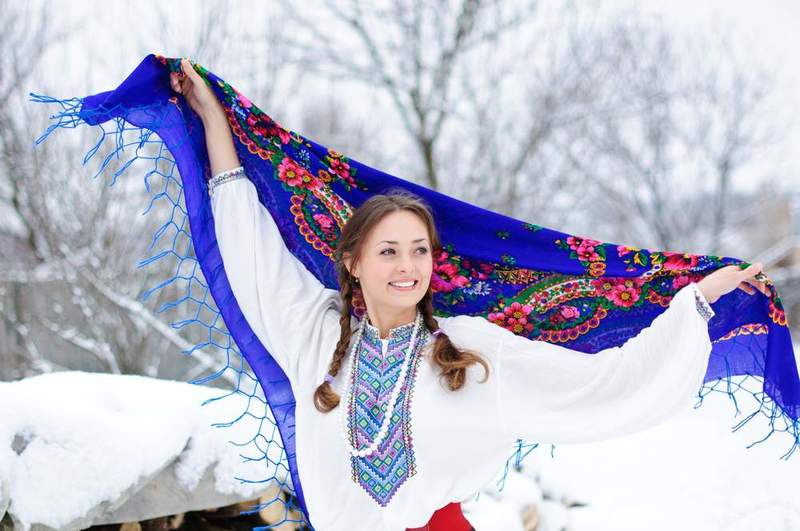 Ukrainians like to celebrate. No, really. Ukrainians love to celebrate! I honestly don’t think that there is another nation out there able to beat us in the ‘who has the most holidays’ contest. Especially in winter. I bet our ancestors had nothing to do on cold snowy December days and holiday-ing turned out to be a simple logical solution to staying sane.

“I bet our ancestors had nothing to do on cold snowy December days and holiday-ing turned out to be a simple logical solution to staying sane.”

Don’t get me wrong: most of the country does work in winter – banks remain open, shops still sell groceries, and schools make their best effort to teach students. City life rarely stops. However, if you get away from the main highways and into the real – the rural – Ukraine of villages, home-made bread, the Hutsuls (the people of the Carpathian mountains) and horsecarts, you’ll be introduced to the endless Saints and other traditional festivals.

But let us leave the challenge of curbing all the celebratory frenzy to the government. Instead, get a glimpse into a unique cultural identity that miraculously survived on the outskirts of modern Europe. From kicking your boots off to find a husband to celebrating two New Years – meet five strange Ukrainian holiday traditions that can still be witnessed – and participated in! – at hundreds of Ukrainian villages.

1). Kick Off Your Boots on St. Catherine’s Day (December 7th)

[Women's holidays in Ukraine]This predominantly female holiday is dedicated to the St. Catherine of Alexandria – Christian Saint, who died in the early 4th century at the hands of a pagan emperor. Traditionally unmarried girls gather together for so-called ‘vechornytsi’ – special evenings devoted to good food, plenty of girls’ gossip and fun fortune-telling customs. If you get lucky and get a chance to join one of those meetups, don’t be taken aback by all the candles, key chains, and baby dolls.

“if you want to know where your sweetheart will come from, try your luck with throwing your boot behind your back: if the heel faces west, your husband will come from that direction.”

Indeed, we take our fortune-telling seriously. So kick off your boots, and participate in the famous shoe line-up tradition: whoever’s shoe is closest to the door, that girl will be the first one to get married. Or, if you want to know where your sweetheart will come from, try your luck with throwing your boot behind your back: if the heel faces west, your husband will come from that direction.

If you’re a guy, don’t be surprised when random girls walk up to you on the street and ask for your name: they’re only trying to find out the name of their grooms! And no matter whether you believe in the good or not-so-good results of your personal fortune-telling, prepare for a festive evening, full of mouth-watering borshch and scrumptious dumplings, bygone customs and folk songs that connect Ukrainian women to their female ancestors from centuries ago.

Imagine waking up on a beautiful St. Andrew’s crisp cold morning, just to find out that your house fence has disappeared. You take a couple of days to frantically search for it until you finally give up. Then, two months later, when spring hits town, you see how your dearly-missed fence has miraculously re-appeared in your neighbor’s yard, carefully tucked under the heaps of melting snow. You sigh and shrug. At least this St. Andrew’s day your horse-cart didn’t show up on the rooftop of your barn, unlike your unlucky neighbor’s two streets down!

“At least this St. Andrew’s day your horse-cart didn’t show up on the rooftop of your barn, unlike your unlucky neighbor’s two streets down!”

When the ladies get their own holiday in winter, guys are bound to get one as well. St. Andrew’s Day is traditionally celebrated by both sexes, with women doing the same sort of fortune-telling they did for St. Catherine’s. It’s the men that get to have all the fun for this holiday! For St. Anthony’s guys are officially allowed to make trouble. From playing innocent pranks, to hiding fences and painting barns – they make the most of their St. Andrew’s privileges!

Christmas is by far Ukrainians’ favorite holiday. But even for Christmas, we manage to bring in so many ancient rituals, that at times the line between the religious and the pagan becomes quite blurry and makes it hard to differentiate what came after the 9th-century country-wide baptism from what came before. First of all, most of Ukrainians belong to the Eastern Orthodox Church and follow the Julian calendar. This means that all holidays in Ukraine (as well as Serbia, Russia, and other Eastern Orthodox countries) lag exactly 13 days behind. Your second Ukrainian Christmas will be in the house on January 7th. This leaves you with an amazing opportunity to catch the Christmas holiday twice!

“Ukrainian Christmas has been able to avoid commercialization, and still centers the celebrations around the figure of Christ.”

However, for Christmas in Ukraine, don’t expect to see Santa Claus, red-nosed reindeer or hanging stockings. Ukrainian Christmas has been able to avoid commercialization, and still centers the celebrations around the figure of Christ. Shops are filled with mangers, carolers sing religious songs, and every bit of traditional Christmas Supper is in some way connected to the birth of Jesus and its apostles. Even the daily Ukrainian greeting changes! Instead of regular ‘goodbyes’ and ‘hellos’, people greet one another with ‘Christ is born’, and respond with ‘Glorify Him’.

4). Moo Under the Dinner Table

Don’t expect presents or a Christmas tree, for that matter. Traditionally the centerpiece of the house is ‘didukh’, a sheaf of wheat that literally means ‘grandfather’s spirit’ and is meant to symbolize the staff of life. Christmas Dinner usually consists of 12 vegan dishes, with kutya – cooked wheat, mixed with poppy seeds, honey, and raisins – being the main treat of the holiday. Traditions of house-to-house caroling are kept up, but even the most famous of them are an intricate mix of Ukraine’s pagan and Christian heritage. In fact, the world-famous Carol of the Bells is originally a Ukrainian folk song, with lyrics that are in no way related to Christmas.

“…the world-famous Carol of the Bells is originally a Ukrainian folk song, with lyrics that are in no way related to Christmas.”

Besides caroling, Ukrainians love to dress up and participate in improvised Christmas plays. Wander along the streets of Lviv on January 7th, and you’re bound to meet the Devil, Death, the three Kings and the Mary herself. Some of those characters might suspiciously remind you of famous Ukrainian politicians. That’s because sometimes we go off the scenario a little and add a sprinkle of sarcasm and humor to spice things up!

If you happen to be so fortunate as to share Christmas Dinner with a Ukrainian family, don’t be surprised if the honorable entrance of kutya is accompanied with inspired mooing, wailing and barking from under the table. The household’s kids are simply trying to bring in the good harvest and rich herds of animals. So go ahead and join in!

In Ukraine, we love to celebrate so much, that we’ve even made sure we have two New Year’s Eves. The first one follows the Gregorian calendar and falls on January 1st when we join in with the rest of the world in the craziness of fireworks and midnight parties. The second one follows the Julian calendar and falls on January 14th, leaving us plenty of time to rest after the all-night dancing of the first New Year’s Eve and… do it all over again!

This time, however, we throw in a few more of our strange ancient customs and hold the vibrant ‘Malanka’ celebrations on the ‘Old New Year’ (yes, that’s how we literally call it). On this night you’ll join crowds of young people walking around people’s houses, caroling, playing pranks and acting out small Christmas-related plays. Some single guys dress up in women’s clothes and lead the troop around town as “Grandma Malanka”. Men who aren’t a fan of wearing women’s clothes for kicks can choose from the more masculine roles of the Goat or the Grandpa. As locals will advise you – Old New Year’s Eve is one of your last chances to go wild and have fun before 40 days of somber fasting for Lent arrives.

Ua Post
The "winning" articles were prepared in advance in the Russian media
Ua Post
Good deals season from LOT
Ua Post
What is Young Business Club?
Ua Post
Free Idel-Ural demands from Russia to stop the oppression of freedom of speech on the internet
Website ad