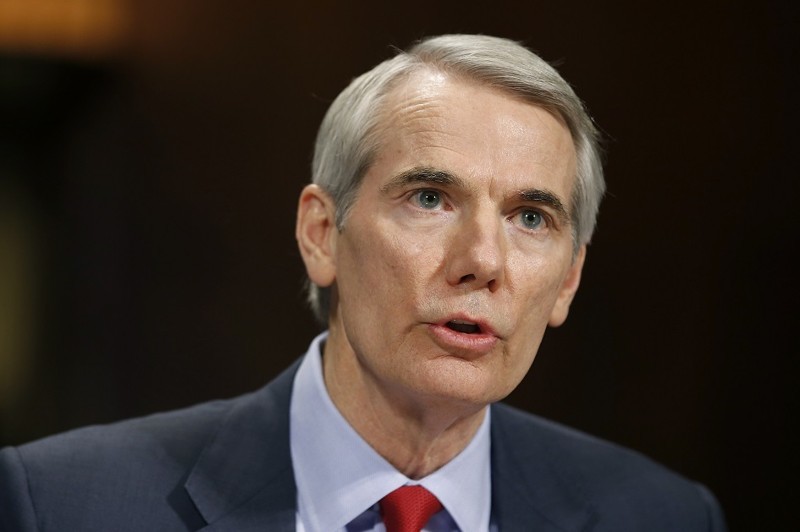 A top U.S. senator says advanced U.S. antitank weapons will allow Ukraine to better defend itself against Russian aggression as the conflict there enters its fifth year.

In an April 2 interview with RFE/RL, Rob Portman (Republican-Ohio) also said that weapons, called Javelins, should also lead to a lasting peace deal, including the fulfilment of the so-called Minsk Accords, which aimed to end the fighting that has killed more than 10,300 people since 2014.

"Now there is an opportunity for [the Ukrainians] to have additional weapons to simply be able to say: 'There will be consequences,' if the aggression continues," Portman said.

"And I think that will lead to a more peaceful solution, including an agreement to live by the Minsk agreement and Minsk 2 rather than what we have seen up to date, which is without being able to push back, without having consequences there was more aggression and, therefore, more bloodshed," he said.

The Minsk cease-fire and peace deals were negotiated by Ukraine, Russia, Germany, and France and signed in September 2014 and February 2015, respectively, aimed at ceasing hostilities in eastern Ukraine.

Portman, who sits on the influential Senate Foreign Relations Committee, spoke to RFE/RL ahead of his arrival in Ukraine, where he's expected to meet top officials.

The delivery of the Javelin missiles come as President Donald Trump's administration moves toward a harder approach in its relations with Russia.

Despite Trump's repeated calls for better ties, his administration has continued stepping up pressure on Russia, using sanctions and other tools to punish Moscow for its actions in Ukraine, Syria, cyberspace, and elsewhere.

Javelins are advanced antitank missiles that could help Ukrainian forces as they battle Russia-backed fighters. With covert support and heavy weaponry from Russian armed forces, those fighters have fought the Ukrainian troops to a stalemate in the eastern Donbas region.

Ukraine has sought those and other weapons for years. Trump's predecessor, Barack Obama, was reluctant to give Javelins to Ukraine, however, fearing it would antagonize Russia and fuel the conflict further.

Some U.S. officials have also voiced fears that the weapons would end up disappearing, fall into the hands of separatist fighters, or be sold on the black market.

"I think the right thing for the United States, for others to do on behalf of Ukraine is to allow them to purchase weapons to be able to defend themselves, including these new weapons that are being delivered now," Portman said.

Trump recently voiced doubts about the overall conflict in Ukraine, saying there was no war there and, even if there was, the United States had no part in it.

Portman said the conflict -- along with Russia's 2014 annexation of Ukraine's Crimea Peninsula -- required a strong response from world community.

"It should be something that the entire world, including the United Nations, continues to stand tall on, because this is really the first time -- as I look at it -- since World War II that we've had this kind of activity without a response," he said. "So we need to continue to stand firm and by doing so, hopefully, the success will be good in Crimea and in Ukraine, but also [this way] we are not setting the precedent for other aggression to take place around the world."

He also indicated that during his visit to Ukraine, he would be pushing officials to pass reforms and do more fight the country's notorious corruption.

"We need to be sure that [the Ukrainians] are implementing their reforms and there has been some progress made there; there have also been areas for more progress. So, we are going to be talking to the leadership [of Ukraine] as well as the members of the" Ukrainian parliament, he said.

Back Source: Radio Free Europe/Radio Liberty
Follow us on: